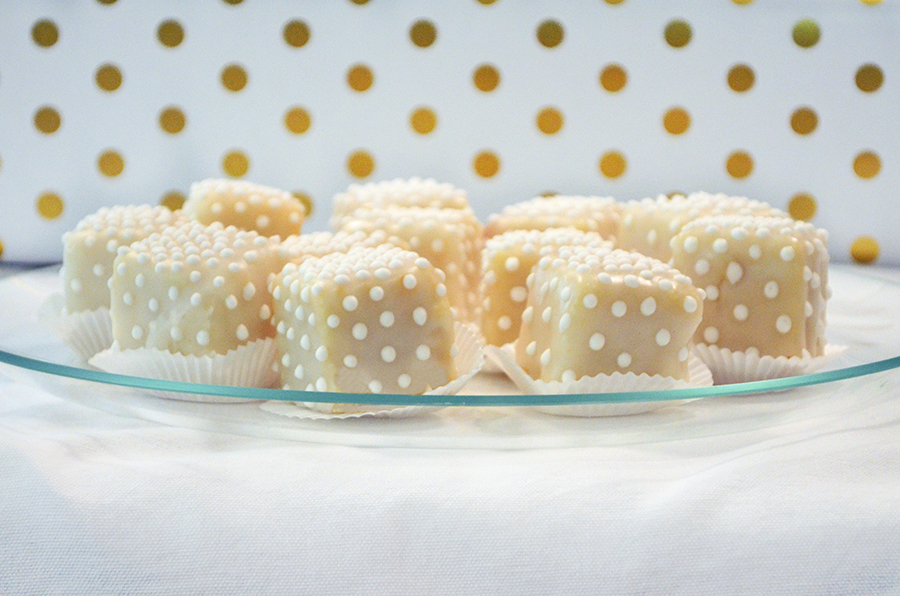 I told you they’d be back!

Several weekends ago my parents’ house was once again transformed into a bed and breakfast as my sister Kate and her friends arrived for the sequel to (and main event of) the bridal shower they’d attended back in July – the wedding of Anita Sellers and Austen Helfrich!

I’d been looking forward to the wedding for months and months; not only because my family has known Anita ever since she and Kate became best friends in elementary school, but also because weddings are to bakers and crafters what porch lights are to moths – completely irresistible. From the impeccably designed “save the date” notices to the beautifully decorated wedding cake, we simply can’t look away – and want to be as close to the action as possible.

Which is why – while Kate was one of Anita’s maids of honor and therefore had the most wedding duties of any Archer – I was excited to contribute whatever I could to the weekend. So it was no surprise, when Kate and my mom decided to host a bridal luncheon for Anita the day before the wedding, that I offered to make dessert for the occasion! Because the event was at lunchtime and the rehearsal dinner was to take place that night, I wanted to make something special but light for the women who would be attending the luncheon. I thought of the petit fours I’d made earlier in the summer, and decided that they would make the perfect single-serving, elegant dessert for the occasion.

Now, dear reader, I have a confession to make; I only hope you can find it in your heart to forgive me. I did something for this project that was against my own personal code of baking snobbery. Because I had to make this dessert on a week night, and because I was starting to panic about my imminent move to New York, and because decorating the cakes takes hours in and of itself…

I bought the pound cake for the petit fours.

But you know what? The Earth didn’t swallow me whole, lightning didn’t strike me down, and I don’t really regret it. Whole Foods makes delicious pound cake, probably as good as or better than what I could make myself. And when what’s really special about a dessert is the time and effort put into the decorations, what’s underneath doesn’t really matter as long as it tastes good. Plus, as we’ll see, I was in for a late night already – purchasing the pound cake proved to be a time saver when I needed it the most.

Since I didn’t know if Anita had chosen a specific color scheme for her wedding, I decided to stick with the one color for the occasion that is never out of place: white! With a white fondant glaze as a base coat and white royal icing decorations, the petit fours would have a bright and classic “white-on-white” look perfect for a luncheon celebrating the bride.

By 8:30 the night before the bridal luncheon, I had trimmed and cubed all of the pound cake for the petit fours and was ready to make the fondant glaze – which is when my time management skills ran into trouble. For a recipe whose end goal is simply being poured over cake, fondant glaze is maddeningly time consuming to make. The ingredients must first be heated to a specific temperature and then cooled to another temperature before use, a process that takes up to an hour in and of itself. Once it reaches the correct temperature for pouring, the glaze hardens quickly, as if to make up for the time lost with all that initial temperature fluctuation; it can be reheated to the right consistency in the microwave, but there is barely time to cover one petit four between reheatings.* Combine this lengthy process with the realization that you’ll have to make more than one batch of fondant and still haven’t gotten around to making royal icing for the decorations, and you have the makings of a very late night.

But, I made it through! With a little delirious Skyping and more than a little one-sided conversation with the characters on my current TV show of choice (it’s only when they start talking back to you that you really know you need to go to sleep) I managed to make it to bed just inside of 3:00 AM. I had finally finished pouring the fondant, making the royal icing, and decorating each petit four with a gradated pattern of dots: now it was time to get some sleep before Friday – and the wedding weekend – began. 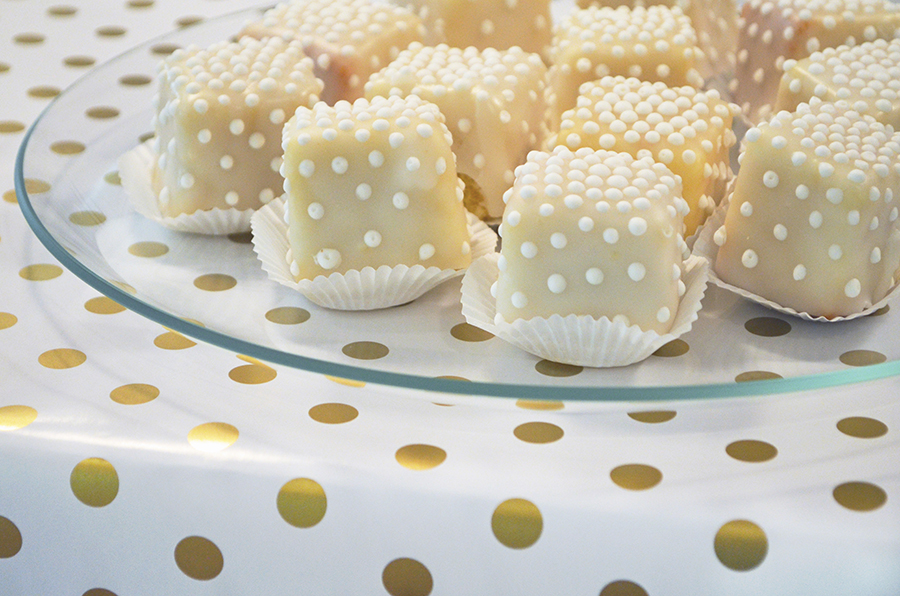 But wait: remember that one time I mentioned that there might actually be some crafting featured in this blog? Lest you think I do nothing but sit in front of my oven waiting for the next baking project to come along (which, admittedly, is sometimes how my life feels), there will be some craftiness in this post!

On one of her weekend visits home before the wedding, Kate had mentioned that she was thinking about getting Anita one of the wedding DIYs of the moment: a dress hanger with the bride’s new name spelled out in wire. I offered to take a shot at making one, and after picking up a pack of dark-stained wooden dress hangers and some jewelry wire, sat down and got to work.

The process was surprisingly easy; the wire was thick but pliable, and by following the font “Clementine Sketch” as an outline and using my dad’s wire-bending jig (a piece of equipment with grooves and removable pegs that I’m sure is actually intended for other purposes but just happens to facilitate this kind of thing), managed to turn out a pretty good result. 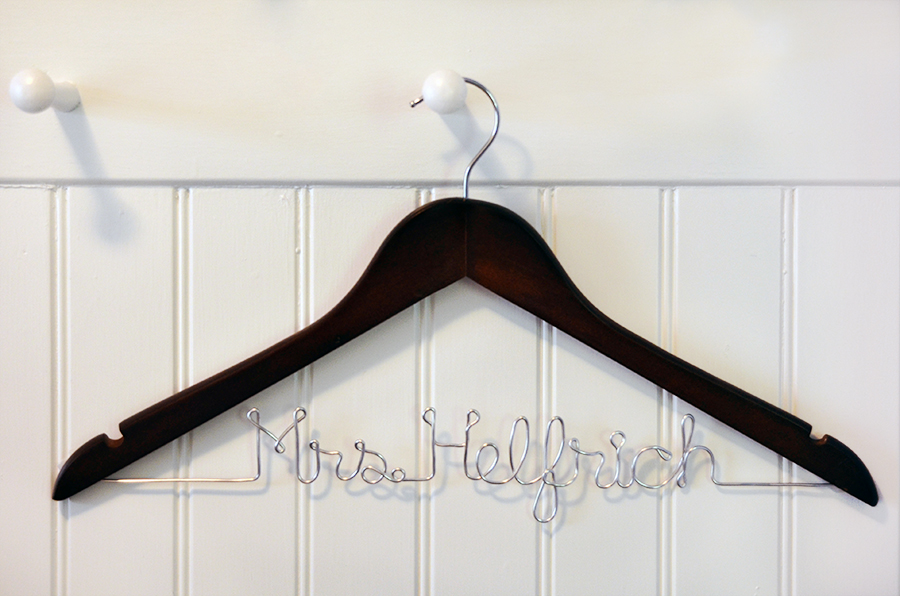 I was at work during the bridal luncheon when both the petit fours and dress hanger went into action, but I’m told they were both received enthusiastically: the petit fours looked great with the rest of the place settings… 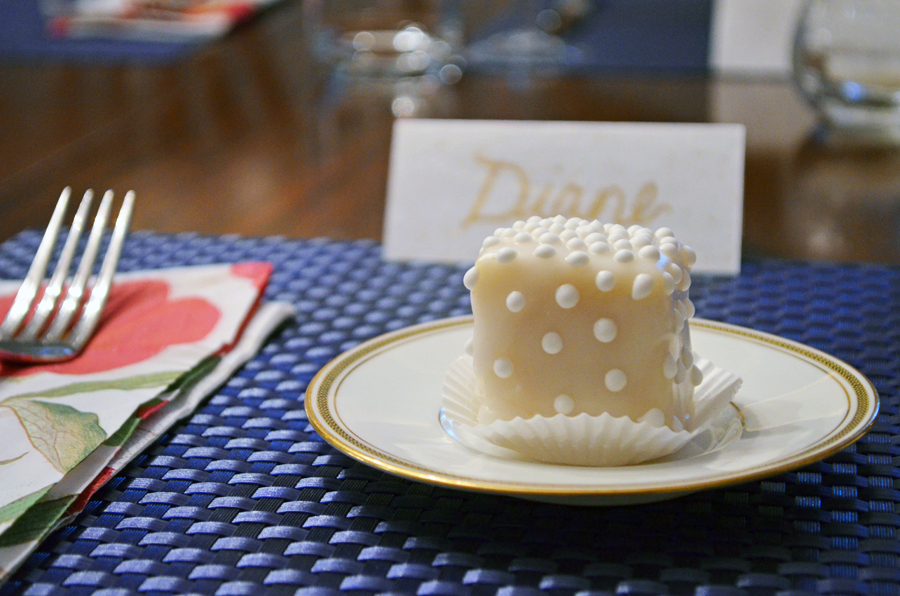 …And Anita loved her dress hanger, which even got to feature in photographs before the wedding! 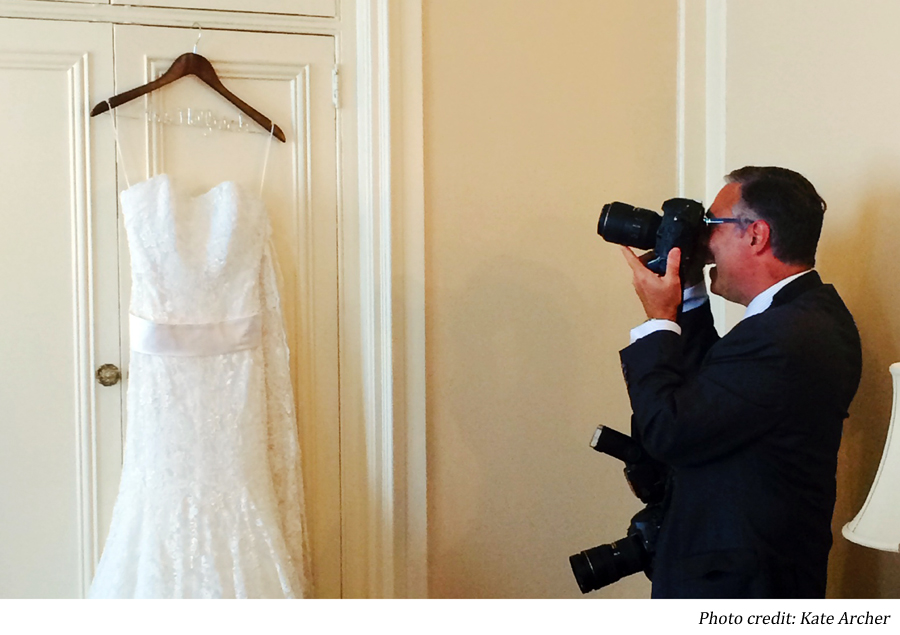 Saturday morning, wedding day, dawned bright and beautiful, and after making all of our house guests crepes for breakfast – after all, I had promised them crepes part deux back in July – it was time to let the professionals take over and enjoy the wedding.

…Which was, of course, perfect in every way! Anita was a beautiful bride, Austen wasn’t half-bad himself, and the entire day was full to the brim with good friends, family, food, and dancing. With a moving ceremony and a fantastic reception, it was certainly an event to remember.

So, in the immortal words of Anita and Austen’s wedding hashtag…

I wish you both a lifetime of happiness together, and I consider myself so privileged to have contributed in even the smallest way to your incredible wedding weekend.

*However, I don’t claim to be an expert on fondant glaze, having only made it twice now – any words of advice are welcome!

Pound Cake: While I used Martha Stewart’s Vanilla Pound Cake for the first petit fours featured on my blog, this time around I purchased my pound cake from Whole Foods. I generally refuse to use any pre-made baked goods in my projects (the reason for which is 80% pride and only 20% flavor), but there is very little taste differential here and it saves a ton of time. Regardless of whether you purchase or bake your pound cake, simply cut the loaves into cubes as close to decorating as possible so the cake doesn’t get stale, and you’re good to go!

Fondant Glaze: I used the same Vegan Yum Yum Poured Fondant recipe that I used on my original fern petit fours. Make sure you leave plenty of time to make this recipe, and (as annoying as it may seem) take the time to follow the instructions exactly. While initially heating the ingredients on the stove, make sure you place the pot over medium or medium-high heat, rather than high; when your goal is to reach a specific temperature it’s tempting to set the stove as high as it can go to save time, but I’ve found that heating the fondant quickly results in grainy, thin fondant rather than the smooth, opaque glaze you’re aiming for.

Royal Icing: My staple recipe, Sweetopia’s Royal Icing, features again on these petit fours. Like I did for the decorations on my career cookies, I added less water to the icing to make sure it didn’t reach flooding consistency and would stay where I put it. A frosting bag and a round tip are all you need to make the royal icing polka dots on these little cakes!