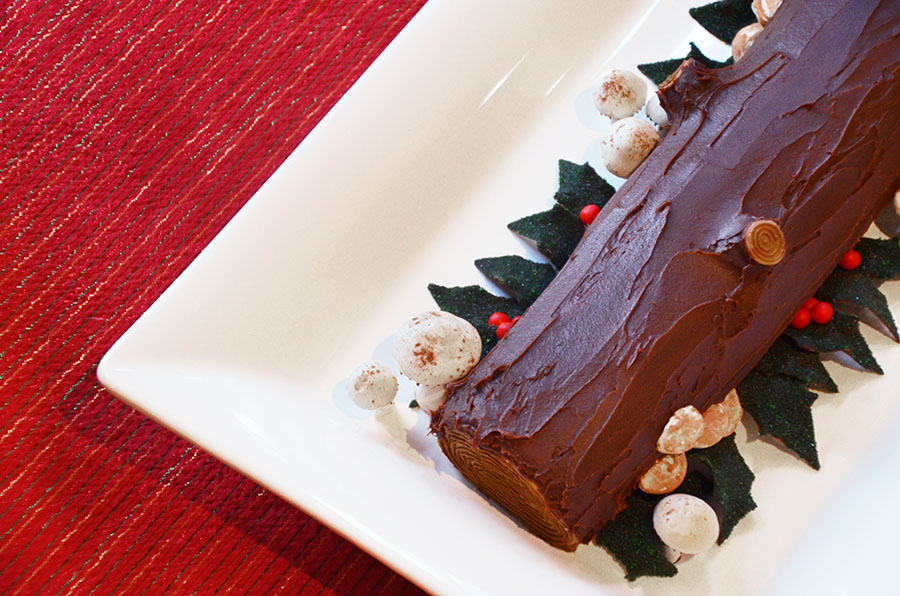 An acute case of appendicitis is one hell of a way to kickstart a Christmas tradition.

While it sometimes feels like I was born with circle cookie cutters and a cake pan in my hands, back in the winter of 2007 I was only just beginning to exercise my baking and decorating muscles; I’d played around with simple recipes, but was ready for something that would really test my skills. Which is why, that Christmas, I decided to embark on my most difficult baking project to date: a Bûche de Noël.

For anyone unfamiliar with the term, a Bûche de Noël is a roulade (or “rolled”) cake decorated to look like the Yule logs once burned in fireplaces around Christmas – a tradition still observed by many with an annual viewing of the “Fireplace for Your Home” series on Netflix. Traditionally embellished with decorations ranging from meringue mushrooms to miniature saws, I saw the Bûche de Noël as the perfect Christmas dessert to bake, decorate, and serve to my family and friends.

But of course, I should have known it wouldn’t be that straightforward.

I was in charge of the Bûche, but was counting on my mom for course-correction in case the cake started trending too far towards the “charcoal” end of the Yule Log spectrum. But a couple of days before Christmas, my mom came down with what we thought was a simple stomach virus. That simple virus escalated when she looked up which side of the body the appendix is on and decided she needed to get to the hospital, stat. One positive diagnosis and a quick surgery later, my mom was home safely recovering: she without her appendix, and me without the help I’d been counting on in the kitchen.

But I squared my shoulders and waded into the recipe on my own; I compulsively double- and triple-checked ingredient measurements, beat the batter for the recommended amount of time down to the millisecond, and, with a sigh of relief, finally slid the cake into the oven. Then I read the next line of directions in the recipe, which instructed me to roll the cake up in a towel when it was finished baking.

I had never come across a cake so high-maintenance that it needed to be swaddled after coming out of the oven, and promptly ran upstairs to my still-recuperating mother to try and figure out what the deal was with this recipe. After learning that this peculiar step would ultimately help prevent the cake from cracking, I dutifully returned to the kitchen and wrapped the Bûche up in a tea towel.

The rest of that first Bûche de Noël went as smoothly as could have been expected after a rocky start. Aside from not reading the meringue mushroom recipe all the way through (1 batch makes enough meringue for 100 mushrooms, which have to sit in the oven for a total of 2½ hours; I ended up with too much meringue and not enough time) the cake pulled together without a hitch, and was a hit at Christmas dinner. The experience provoked such a wide spectrum of emotions (ranging from panic to pride) that I wrote a piece about it in a high school food writing class*, appropriately titled “A Bûche in the Time of Appendicitis”. 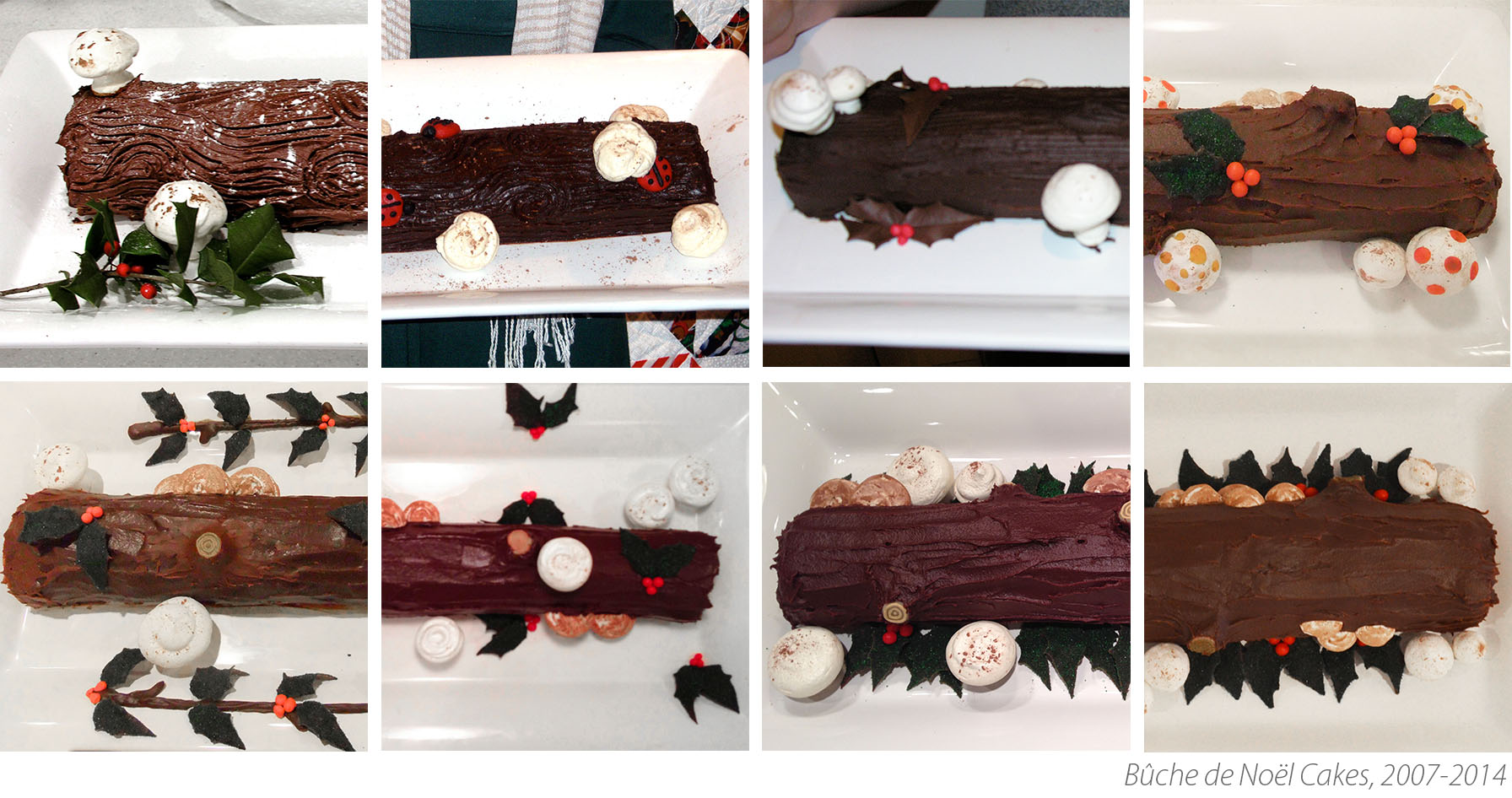 The Bûche has been an Archer Christmas tradition for 8 years now; decorations and recipes have changed over time (marzipan ladybugs have come and gone, meringue tree fungus came and stayed) but over time certain elements have solidified into the Bûche I’ve now made for the past couple of Christmases:

Despite my best efforts every year to harvest my leaves in full daylight on a beautiful December afternoon, I somehow always procrastinate and end up picking them in freezing rain at night with the help of a headlamp. After my hands have thawed out and I’ve nursed my tiny stab wounds from wrestling with the holly bush, I wipe the leaves clean with a damp paper towel and use a paintbrush (ostensibly food-dedicated but generally just pulled from the craft closet and given a cursory rinse) to coat one side of each leaf with melted chocolate. I then cover the leaves with green sprinkles before the chocolate hardens, and let them chill in the freezer before carefully peeling the chocolate-and-sprinkle coating away from the leaves underneath. Lastly, I dye marzipan or fondant with red food coloring to create holly berries, which also has the added benefit of making my hands look an ax murderer’s just in time for Christmas dinner and/or Christmas Eve services. 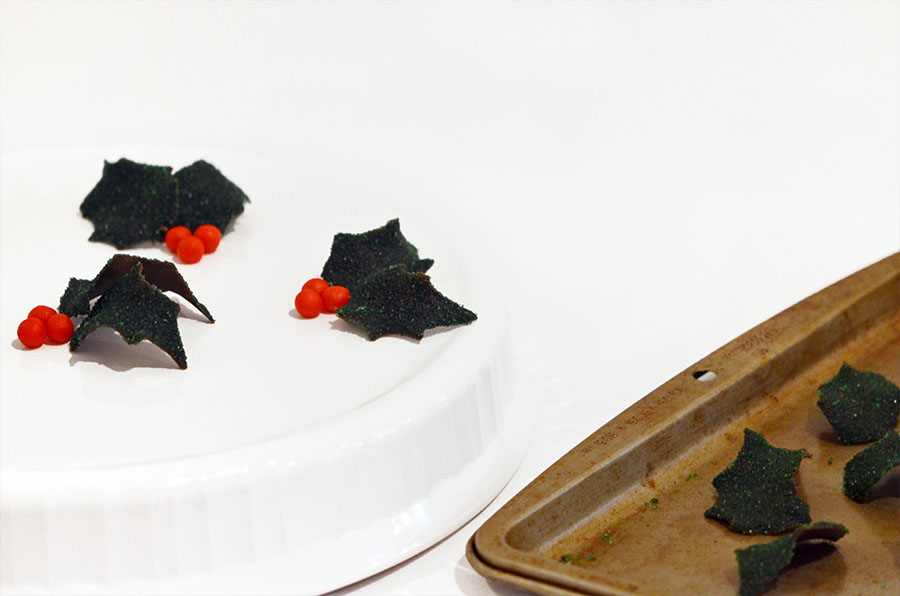 Meringue mushrooms are the easiest part of my Bûche de Noël process, but perhaps the most time consuming simply because of the number of hours they spend in the oven. After making the meringue, piping out the mushroom shapes, and letting them cool completely once they’ve come out of the oven, I use melted chocolate to glue the stems and caps together. A couple of years after I started making the Bûche, this process started to feel too straightforward; it needed an absurd level of detail to put it on par with the rest of the cake’s elements, so I began using melted chocolate to pipe gills under every mushroom cap. I usually top my mushrooms with a simple dusting of cocoa powder, but for bonus points you can decorate yours with the markings of a particularly poisonous variety and invite the mushroom expert in your life over for Christmas dinner. 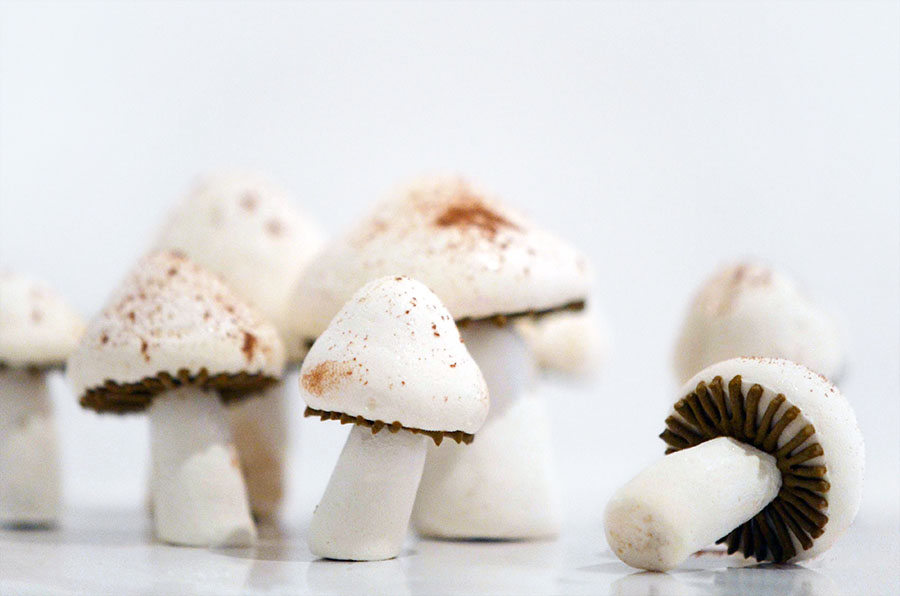 There’s a particular type of fungus my family often finds on Adirondack hikes that we like to call the “Writing Fungus”; when freshly picked and drawn on with a sharp implement, the lines show up as a dark brown and are preserved as the fungus dries. My grandfather’s house on Lake George is filled with writing fungi covered in drawings and stories of hikes going back decades, so when I realized (a couple of years into making the Bûche) that flatter meringue mushroom caps broken in half look like writing fungi, I decided to add them to the cake in a nod to my family’s history. Now every year I intentionally pipe out flat disks of meringue along with taller mushroom caps, then break them in half and rub the tops with cocoa powder before attaching them to the side of the Bûche. Mushrooms may be a staple when it comes to decorating Bûche de Noël cakes, but I like to think that meringue writing fungi are my own contribution to the field of confectionary mycology. 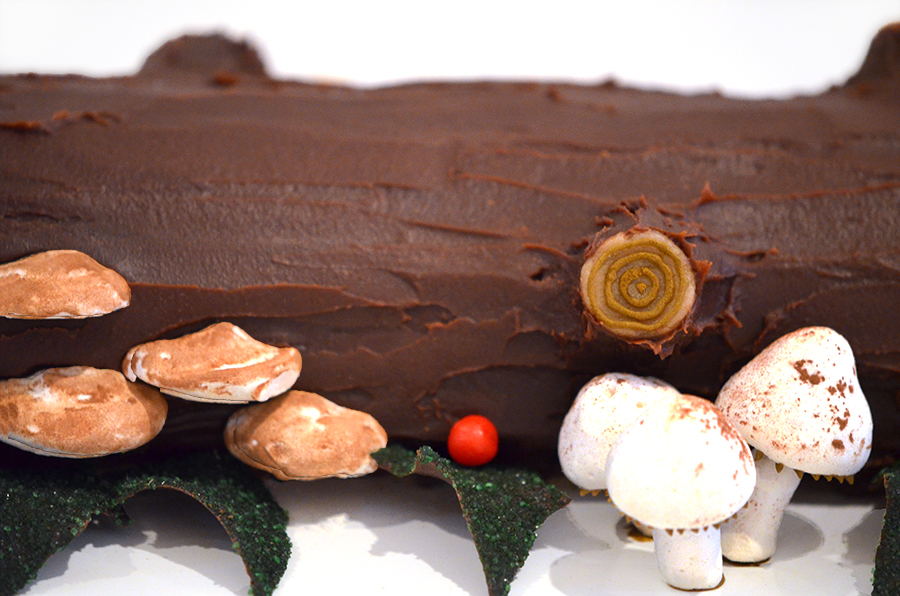 Baking and Assembling the Bûche

After the Bûche has come out of the oven and cooled completely in its tea towel cocoon, I partially unroll it and cover the inside with chocolate-bourbon frosting. After rerolling the cake, I then cover the outside with the same frosting, using an offset spatula to create the look of bark. Small heaped mounds of frosting become the bases of sawed-off “branches” with the help of light brown marzipan covered in buttercream tree rings, and the ends of the cake are similarly capped with marzipan to give the illusion of a sawed-off log. The chocolate holly leaves and marzipan berries line the bottom of the Bûche, while meringue mushrooms and writing fungi “grow” out of the sides. 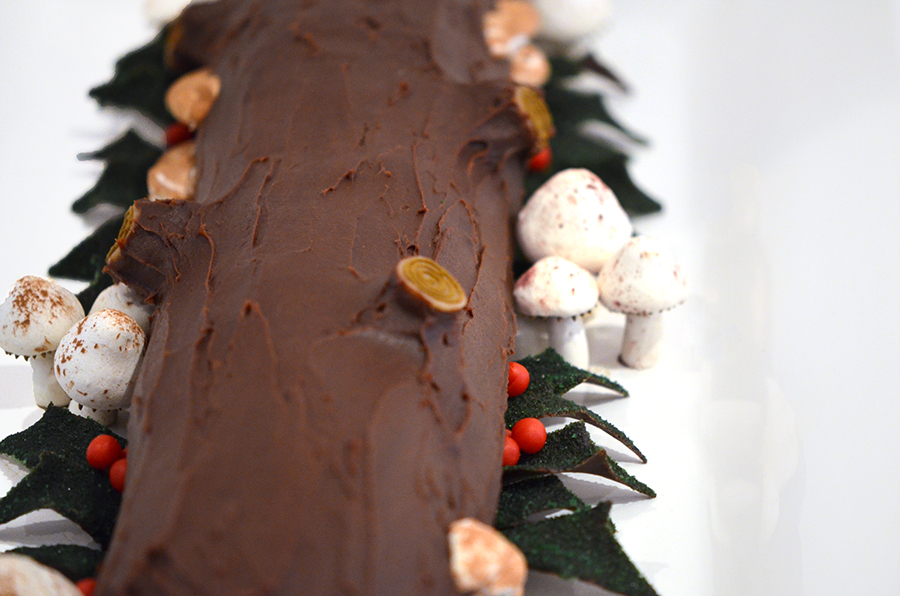 Even though I’ve been making this cake for nearly a decade, the Bûche still has the ability to reduce me to the inexperienced baker I was in the winter of 2007, flying solo in the kitchen for the first time. I’ve made every mistake in the book over the years, from thinking I could leave out the pecans in the cake recipe (resulting in a panicked dash to the grocery store and a cake do-over) to putting the frosting in the fridge for too long and not leaving enough time for it to defrost (resulting in a panicked dash to the grocery store and a frosting do-over) to burning the bourbon-caramel sauce that goes with the cake (you know how this ends). Year after year I think that the Bûche causes too much stress, that I’ll hand over the Christmas dessert reins to someone else for a change and enjoy the lead-up to the holiday without getting stabbed by holly leaves, covered in meringue, or splattered by hot caramel.

Even though I’ve been making the Bûche for nearly a decade, it still gives me the same proud feeling of that inexperienced baker who conquered her first major project by herself so many years ago. It’s better than the sugar rush of 100 meringue mushrooms (though that does produce a pretty good jolt), the feeling of having worked for days to pull together multiple recipes and working parts into a cake I’m proud to place in front of my family and friends. I don’t know if or when I’ll retire the Bûche, but for now it’s an annual lesson in both humility and hard work – with the additional bonus of a delicious caramel-chocolate-bourbon-pecan ending. 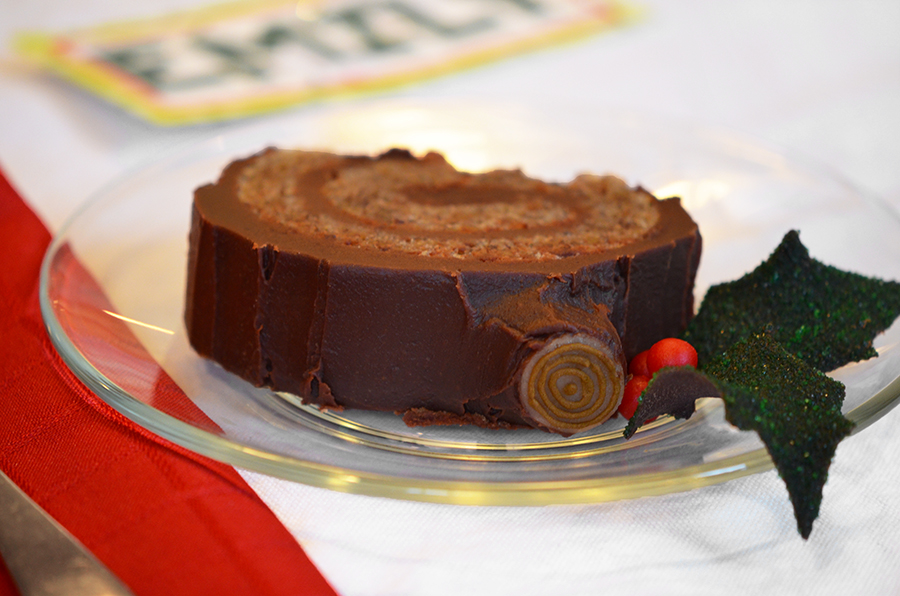 *I’m forever indebted to the teacher of that class, Mrs. Jen Fiorini (though she was Ms. Emmi, or “Jemmi” to us at the time), for helping me realize what I call the three “F’s” of writing: that it could be Fun, Funny, and about Food.

Bûche de Noël: After my first year of making the Buche, I started using a combination of two recipes. My primary source is Bon Apetit’s Caramel-Pecan Bûche de Noël: with a pecan cake base and bourbon-spiked chocolate frosting and caramel sauce, this cake is to die for even without the decorative bells and whistles. Be sure to make a double batch of the caramel sauce; it’s so good that one likely won’t be enough for your guests, and in the unlikely event you have any left over, it’s fantastic on ice cream (or anything, honestly). I still follow this other Bon Apetit recipe for post-baking instructions – as confusing as the teal towel step was the first time around, it’s really essential for avoiding cracks in your cake when it comes time to assemble the Bûche.

Meringue Mushrooms: I’ve been using the same mushroom recipe since 2007; as mentioned above, make sure you read the recipe thoroughly and adjust it to your needs so you don’t end up with an over-abundance of fungi – one batch makes about 100 mushrooms, so I usually quarter the recipe.