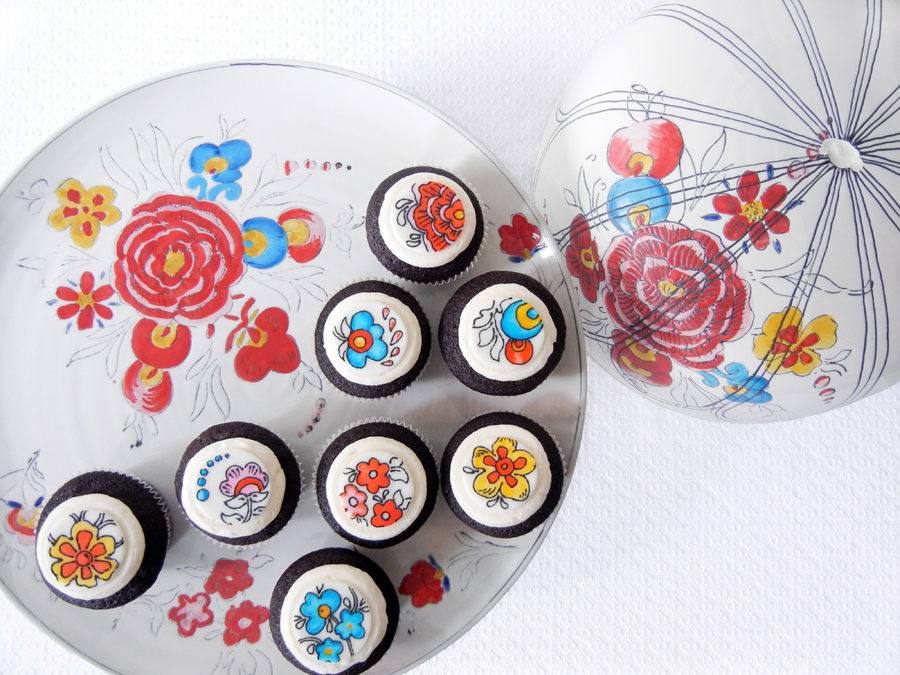 I went out for a little black dress and came back with a cake stand.

During the summer of 2012 I was lucky to intern with the creative display team at the flagship Anthropologie store in Wayne, PA. The main window concept we worked on that summer called for handmade paper flowers colored with natural dyes, so I spent the majority of my internship in a tiny craft room on the second floor of the store, experimenting with different fruits, vegetables, and spices to see which produced the most vibrant hues. Unfortunately this meant that boiling cabbage mixed with Anthropologie candles was the scent of my summer and some of my clothing is still splattered with (all-natural, but very pervasive) vegetable dye, but I wouldn’t have traded the experience for the world: I was in crafting heaven, and it was an invaluable opportunity to peek behind the scenes of an amazing brand. (I was also no stranger to internships involving small spaces and strange smells, having spent the summer two years before organizing the paint closet at the Academy of Natural Sciences in Philadelphia.)

It was during my Anthropologie internship that I first laid eyes on a beautiful cake stand and dome by designer Molly Hatch. Made of white stoneware and hand painted with a whimsical, brightly colored floral design, it was both love at first sight and my first cake stand love, to boot. Unfortunately, it was a love I couldn’t afford: the stand was nearly $100, too much for me to spend even with the 20% off I received as an intern.

So I pined for the cake stand; I admired it from afar, visiting in-store when I could but always allowing myself to only look, never purchase. Over time my infatuation with the cake stand diminished to a dull non-buyer’s remorse, and I came to largely forget about it as one year passed, and then another.

Until this past spring, when I found myself in need of a new little black dress and ventured out into Manhattan on a Saturday morning to find one. After visiting assorted stores with no luck, I stopped into Anthropologie to see if there were any LBDs in the sale section. And that’s when I saw it: the cake stand I’d fallen for three years ago, sitting on the sale rack like a long-lost love. It was missing the knob from the top of its dome, making it damaged goods in the store’s eyes, but not to mine: after just a few minutes of deliberation (and haggling with a store associate over the damage discount), I lugged the cake stand and dome to the register and then back uptown to its new home in my apartment.

Since then, the stand has been anything but dead weight in my apartment; it sits on a stack of baking books on my bureau and holds my orchids (the only two I’ve managed not to kill) and my jewelry. But a variation on Lumiere’s lament in “Be Our Guest” kept running through my head ( ♫ life is so unnerving / for cake serveware that’s not serving… ♬ ) and I knew that after months of existing as a purely decorative item, it was time for the cake stand to get back to its roots and display some baked goods.

I’d recently read about a decorating technique on the blog Sugar and Cloth that involved painting on buttercream with a mixture of food coloring and vodka (vodkacolors rather than watercolors, if you will). Since it was the design on the cake stand that had caught my eye in the first place, I decided to replicate it on fondant cupcake decorations using Sugar and Cloth’s technique.

Fortunately, my cousin and I had a huge bottle of whipped cream flavored vodka in our apartment (best not to ask why), so after cutting out my fondant and doing some preliminary digital sketches to figure out how the cake stand’s design would translate to a small circular layout, I was ready to dive into my food coloring and vodka painting. 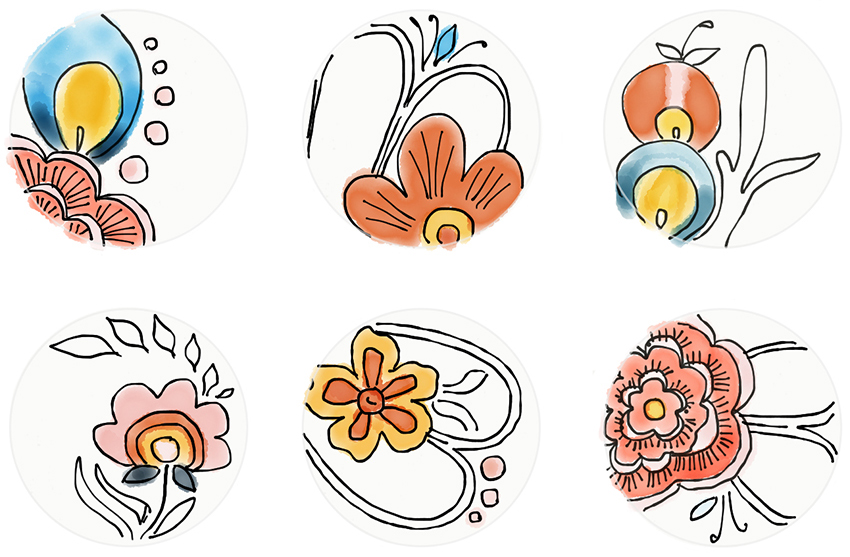 I began by tracing designs onto each fondant circle with a toothpick, then mixed my “vodkacolors” in a ceramic palette. I filled in the larger blocks of color in each design with a small paintbrush, using the toothpick tracings to guide me. Because I worked with the bottle of vodka and a full shot glass nearby to replenish the alcohol as it evaporated, my workspace gave me the appearance of a painter whose muse was whipped cream vodka rather than the more traditional Absinthe; fortunately, I did this part of the decorating alone in my apartment so no one could plan an intervention for what might have been interpreted as either an unhealthy volume of drinking or a wimpy choice of alcohol (not sure which is the worse offense). 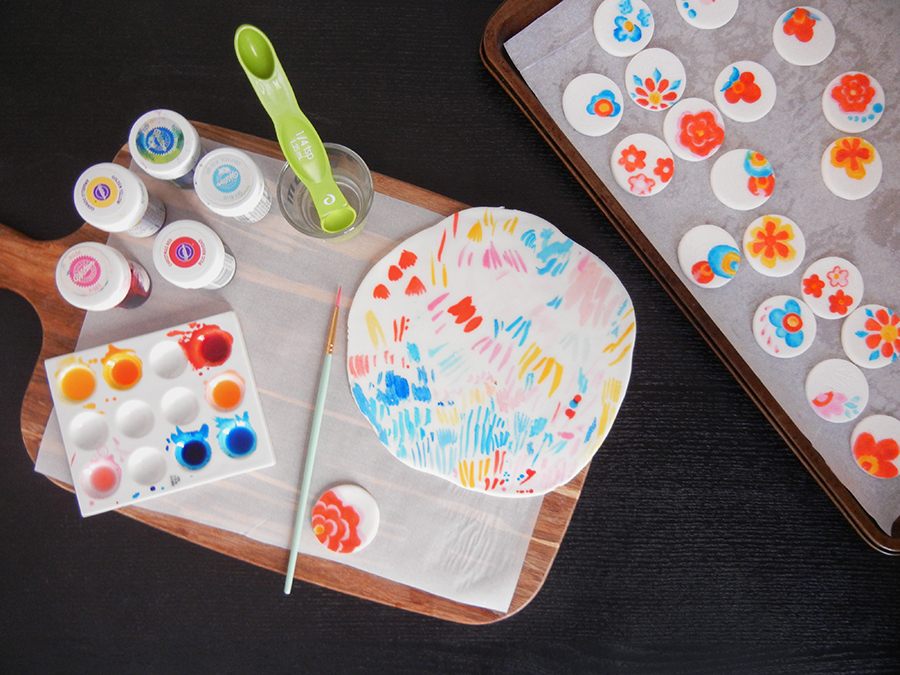 Outlines of black royal icing piped from a fine-tipped henna applicator finished off each design. After whipping up a batch of my favorite chocolate cupcakes and vanilla buttercream and placing the fondant decorations on top, my cake stand finally got to display something other than plants and necklaces – and my coworkers got to enjoy a nice start to the week with slightly boozy cupcakes (just kidding, the alcohol evaporates… I think). 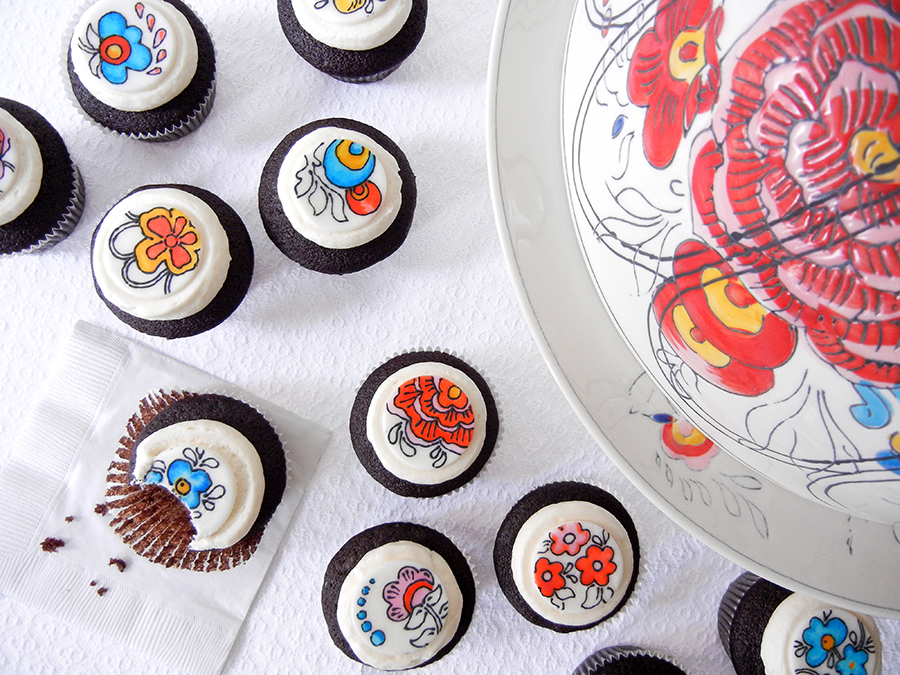 I never found that little black dress, but can’t wait to see what comes home with me the next time I go looking for it.

Chocolate Cupcakes: My favorite chocolate cake recipe comes from The Kitchen Workshop, a small cooking school in Paoli, PA. I took a week-long course there in high school, and this recipe (covered with splatters of chocolate and grease stains) has stuck with me over the years. The best part is that the cupcakes don’t call for any eggs or butter, which means you’re already halfway to a vegan dessert, and the recipe doesn’t even require an electric mixer – just a bowl and a spoon. It’s one of the few recipes I love that isn’t available online (which makes it even more special, somehow) so I’ve reproduced it for you below: 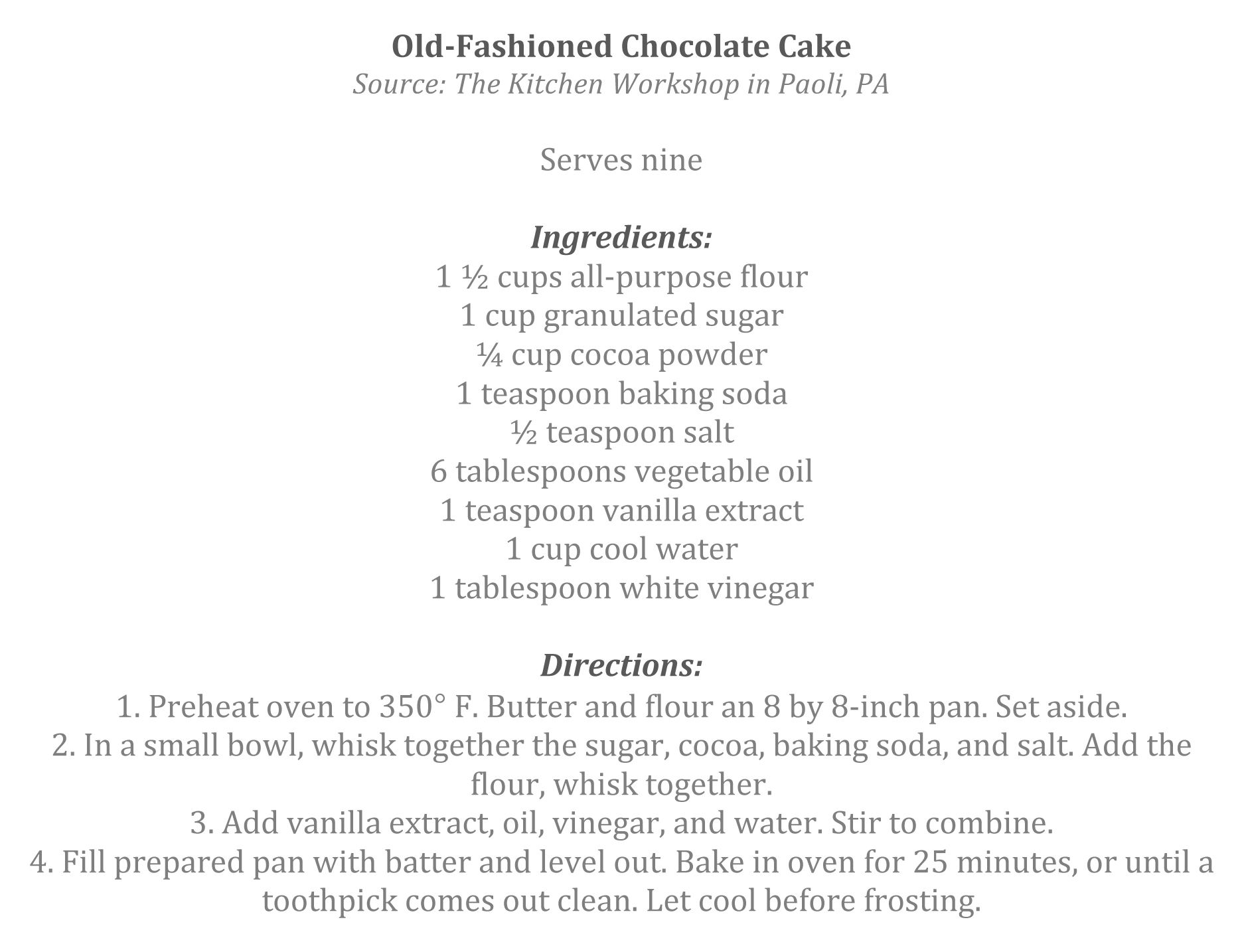 Vanilla Buttercream: As usual, I used my go-to vanilla buttercream from Real Simple. To get the look of the frosting on these cupcakes, fit an icing bag with a large diameter tip (mine is about a 1/2 inch). Holding the bag so that it’s slightly above the center of the cupcake, squeeze steadily, without moving the tip, until the frosting has reached the desired coverage on the cupcake. Release pressure on the bag and twist the tip away from the cupcake for a smooth surface. If desired, place fondant decorations on top, pressing down to flatten the mound of icing.