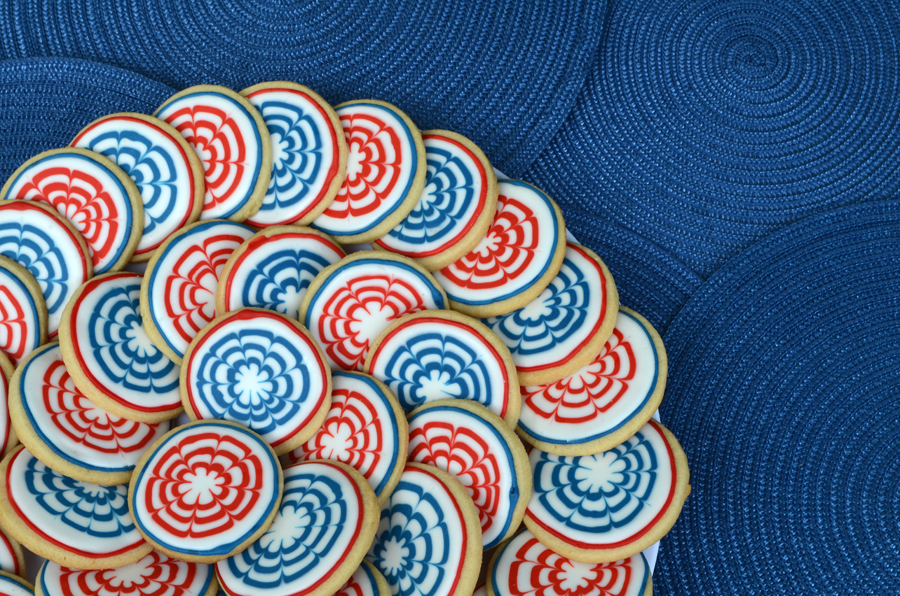 A day for patriotism, barbecues, sparklers… and your father calling upon your vaguely remembered high school Classics education to translate “Let’s blow some sh*t up” into Latin.*

That phrase has been my Dad’s Fourth of July motto for over 20 years, during which time he’s been in charge of setting off the fireworks show at our local swim club. Every summer as far back as I can remember, my Dad has left our picnic early with a team of volunteers to prepare and launch the fireworks; he gets to play with explosives and the rest of us get a fantastic show, so it’s really a win-win situation for everyone.

I joined the crew a few years ago, and haven’t looked back since: while setting off the fireworks means you miss out on watching the show (not much time to gawk at the sky when you need to be preparing the next salvo), there’s no doubt in my mind that the experience is worth the sacrifice. There’s nothing quite like the smell of cordite in the air and the thud in your chest when a round takes off, or the sudden silence after the finale when the faint sound of cheering can be heard from the audience across the pond. It’s also hard to imagine setting the show off with a better team: this year I worked alongside my Dad, my boyfriend Thomas, my cousin Ryan, and various other swim club members (including a gentleman who used to work artillery during his Army days, and whose understandable passion for things that go “boom” is unmatched by anyone except perhaps my father).

But even though I’ve added pyrotechnics to my list of activities on the Fourth of July, I’m loathe to abandon my other patriotic responsibility for the occasion: which is to say, of course, making dessert. As I’ve mentioned in other posts, dessert for the Fourth comes with more restrictions than most of my other projects, for which I’m pretty much given free rein to do whatever my overachieving little mind can think of. But this dessert needs to be easily mass-produced to accommodate a large guest list, made of ingredients that won’t spoil or melt since refrigerator space is limited, and, most importantly, easy to transport and eat on the go, as the fireworks crew often grabs dessert on the way to set up before the rest of the party has even settled down to eat dinner. So while I might like to whip up an elaborate trifle with summer berries or a cake covered with intricate buttercream designs, for the past few years I’ve “settled” for making sugar cookies with patriotic royal icing decorations.

Royal icing is one of my favorite ways to decorate cookies, for multiple reasons. First, because there’s no butter in it, royal icing has a pure white base that makes for beautifully vibrant hues when food coloring is added. Second, royal icing hardens to a smooth matte finish, giving cookies points for both style and durability. And last, I love using royal icing because you’re initially faced with a pile of plain cookies that are like little blank canvases waiting to be filled, with endless possibilities for decorating; I’ve used royal icing to decorate cookies for countless occasions, from spiderwebs for Halloween to dinosaurs wearing Santa hats for Christmas. (Incidentally, I’m just now realizing the irony in using royal icing on a dessert commemorating our country’s independence from royalty.) 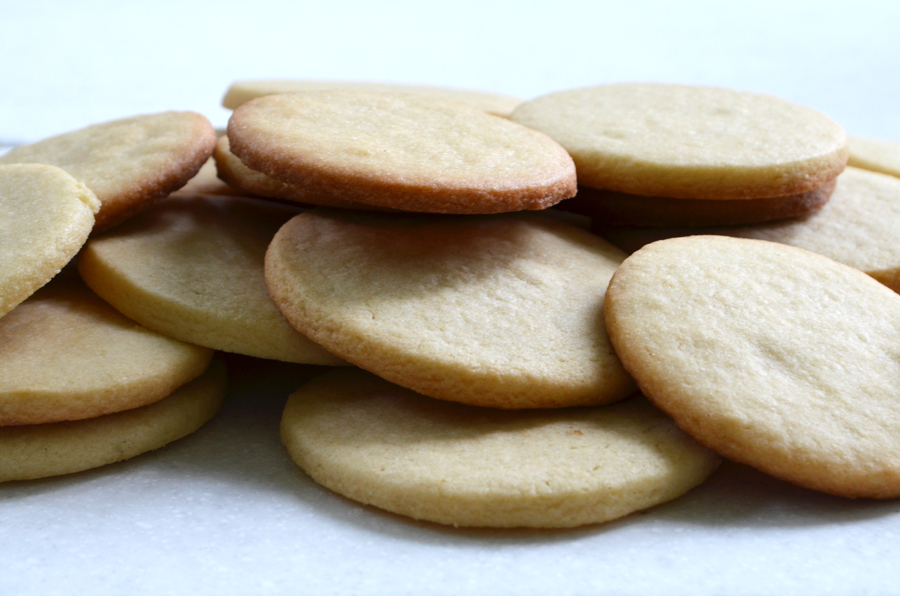 The technique for decorating these cookies will be familiar to anyone who has ever worked with marbleized paper before. After coloring my icing, I outlined each of the cookies with either a red or a blue circle of icing. After the outlines dried, I “flooded” the inside of the circle with white royal icing, tapping the cookie to make sure the icing was evenly distributed. Then I immediately drew three concentric circles in either red or blue on top of the white icing. This is where the marbling technique came into play: while the icing was still fluid, I took a toothpick and pulled it through the concentric circles towards the center of the cookie, creating the effect you see below.

You can get different results depending on the shapes you create with icing and the direction in which you pull the toothpick. I experimented with lots of different designs when I first started making these cookies for the Fourth, but over the years I’ve settled on using just the one; it’s easy to mass produce, and most closely resembles fireworks of everything I’ve tried. 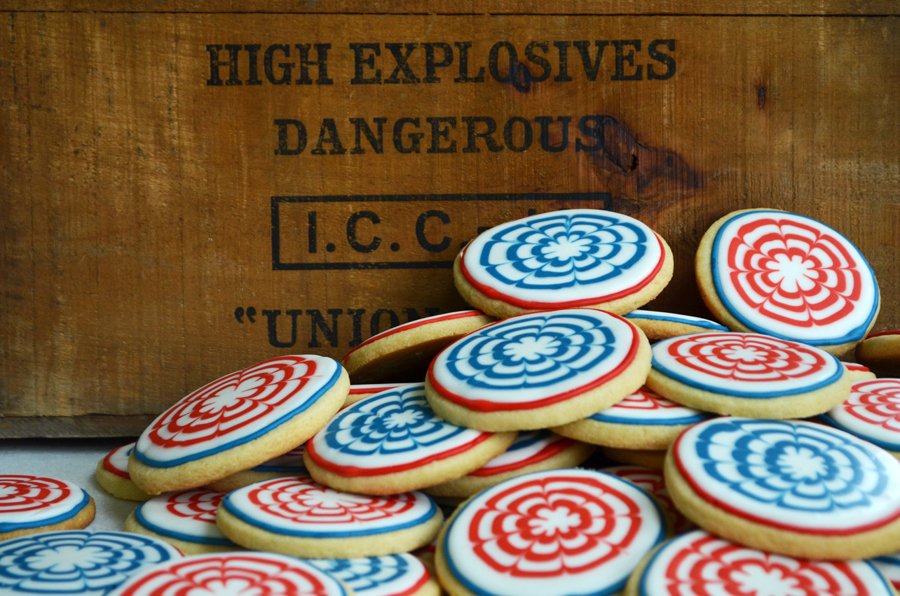 By some miracle I finished baking and decorating the cookies a full 24 hours before the picnic, so I could spend the afternoon of the Fourth relaxing and chatting with family and friends. But when 7:30 came along, I left the picnic with the other fireworks team members to head over to the launch site – with a box of cookies in tow, of course! The next couple of hours were a blur of unpacking fireworks, safety debriefings, and check-ins from the police officer and firetruck that hang around every year as a (thus far unnecessary) safety backup. This was the first year we managed to get our attending officer to accept a cookie, an accomplishment of which I’m very proud – while at the same time uncertain if offering baked goods to the police can be construed as bribing an officer of the law. 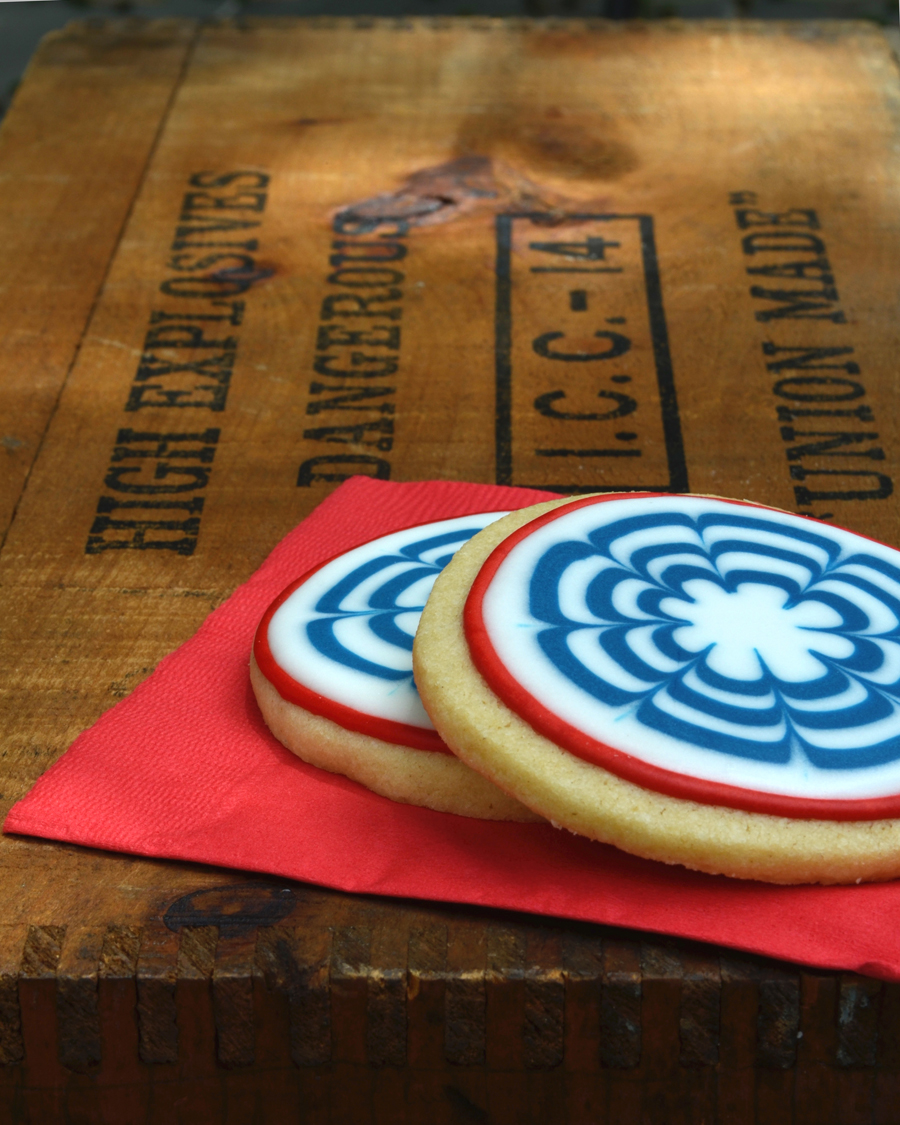 At 9:30, the show went off smoothly and to much applause. Afterwards, we all trudged back over to our appreciative – but anxious – audience to assure them we were alive and well, and to perform the obligatory post-show “essentials” check. After a thorough examination, we determined that everyone still had 10 toes and 10 fingers, and that there were approximately 30 cookies leftover to eat: a perfect count.

*for anyone who’s curious, “explodemus aliquam merdam” is the closest I’ve gotten – if there are any Latin scholars reading, please feel free to chime in with a more accurate translation!

Sugar Cookies: I got this sugar cookie recipe, along with the original royal icing decoration technique, from this recipe featured in the July 2011 issue of Martha Stewart Living. I used to use a thinner shortbread cookie for this project, but decided this year to switch to the more robust sugar variety to counteract some of the knocking about that inevitably happens in transit on the Fourth of July. Remember that sugar cookies are a quintessential example of the “it will keep baking after you take it out of the oven” rule: if you want nice chewy sugar cookies, make sure to remove them from the oven before you think they’re perfectly done, or you’ll end up with a less satisfactory – though admittedly still delicious – crunch.

Royal Icing: While Martha includes a royal icing recipe in the cookie recipe I link to above, my favorite royal icing comes from the blog Sweetopia. Not only does her recipe come in the form of an adorable illustration, but she also has a great tutorial on decorating with royal icing that I still consult. A word of caution: royal icing needs to mix for a full 10 minutes before use, so either use a stand mixer or prepare for some sore arm muscles! Royal icing also has a tendency to dry quickly, so if you’re not using it all at once, put a damp paper towel over your bowl to keep the icing moist. I also keep my filled icing bags in glasses with damp paper towels at the bottom so the icing doesn’t dry and clog my decorating tips when I switch between colors.

Circle Cookie Cutters: As you might expect from a baking blog called in certain circles, very little in my kitchen works harder than my set of Ateco circle cookie cutters (except perhaps my stand mixer ever since a solid chunk of brown sugar knocked it a bit off its rotation – but that’s another story). I’ve never called out baking equipment on my blog before, but after realizing that 3 of the 4 projects I’ve featured so far use these cookie cutters, I figured they were owed a shout-out. These are the ultimate multi-purpose tools, good for everything from tracing designs on macarons to cutting out miniature crepes to serving their intended purpose as actual cookie cutters – and the list goes on and on. If you’re a baker who loves circles – and I can’t be the only one! – I highly recommend picking up a set.