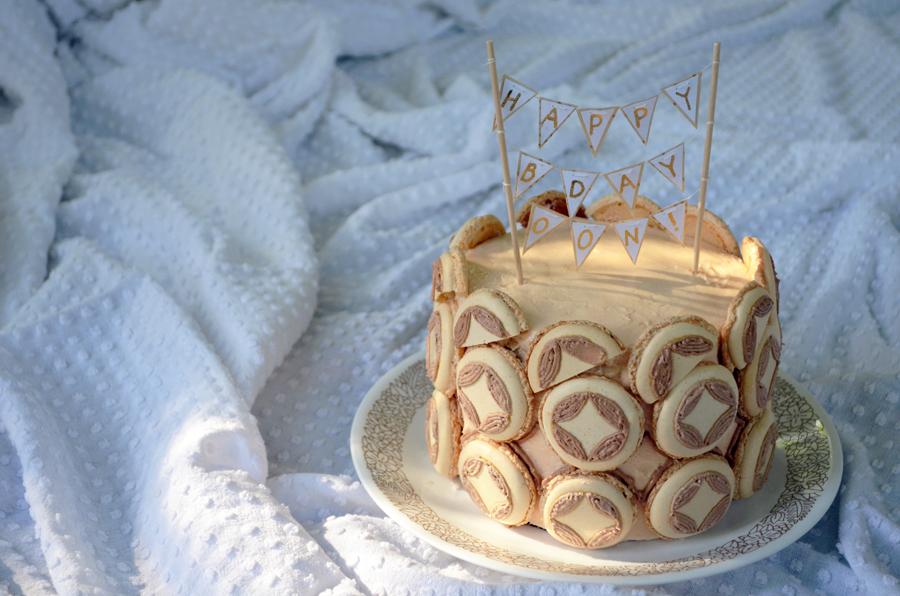 I know that the correct spelling for meringue based-cookies sandwiched with buttercream is “macaron”, not “macaroon”. But there’s a reason for the misspelling, I promise, because I made this cake for my favorite (and only, but that’s beside the point) sister Kate, AKA Oon.

Kate and I have been calling each other Oon now for more years than I can count: while the nickname’s story is a long one, it started out as a different word that, through autocorrect and abbreviations, morphed into the Oon that so amuses friends and family and confuses strangers today. I recently sent some macarons up with my parents for Kate when they visited her in New York City, and she thought they were some of the best things I had ever made. So, in honor of Oon and her appreciation for macarons, it seemed only appropriate that I make a macarOon cake to celebrate her birthday!

First I had to figure out the best way to incorporate macarons into the cake’s design. I was worried that frosting wouldn’t be able to hold entire macarons in place, so I decided to take a “deconstruction” approach to the cake: by frosting it with the same buttercream I use to fill macarons and then decorating with only macaron shells, the cake would look great, stay together, and still incorporate all the components of a macaron in every piece. After brushing off my geometry skills (the only math class I ever really liked, and coincidentally the only one with an emphasis on circles) to figure out how many macarons and of what size I would need to cover the cake, I still had to bake the cake itself, make the frosting, and bake the macaron shells. With so many recipes in action at once, I learned an important lesson… 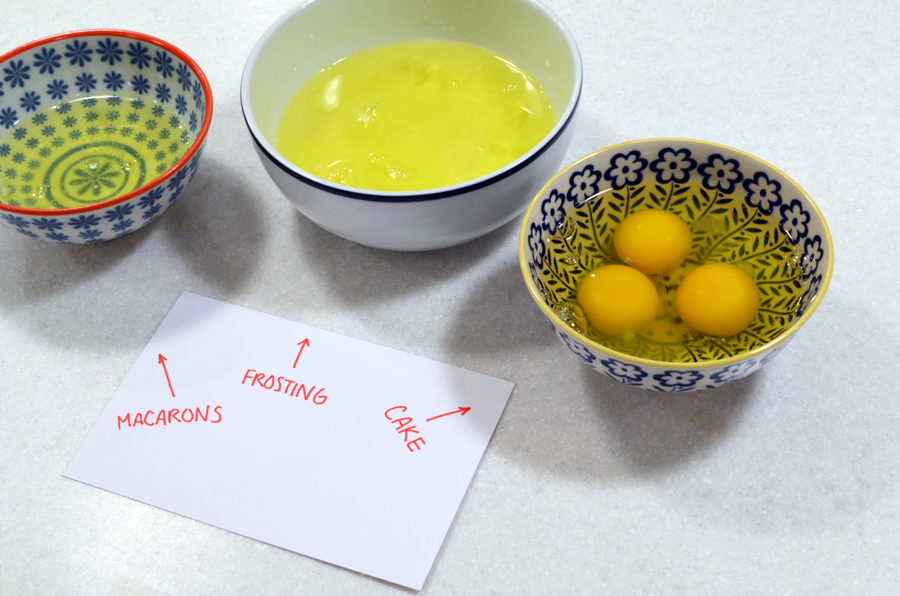 Always label your ingredients, lest you get confused!

After so much preparation and baking, it was late Friday night before I even got to assembling, frosting, and placing the macaron shells on the sides of the cake. Further decorating would have to wait until the next morning, when Kate was due to arrive.

This might be a good time for a confession. While I like to pretend that all my baking projects proceed according to a regimented schedule that would make Martha Stewart weep with joy, too often even my best laid plans go awry (and I even did math for this one, people), leaving me sprinting to hide the cake as the birthday girl is walking through the door. Case in point: at 8:00 on Saturday morning I still had to run to the grocery store and purchase ingredients for more frosting, with which I would need to decorate each of the more than 30 individual macaron shells on the cake. And all this before Kate arrived at 11:00.

I wanted to decorate each macaron shell with a simple geometric design that would give the overall cake a tiled look. Normally I’m all for bright colors on birthday cakes, but the vanilla macarons and frosting had created an elegant neutral palate that I decided to extend by using chocolate buttercream for the additional decorations. At this point, I was stymied as to how I was going to decorate each macaron identically; in any other medium my solution would be to trace a master template, but anyone who has tried tracing with buttercream (and believe me, I have) knows it to be a generally messy and discouraging process. Fortunately, while searching through my baking equipment for inspiration, I came across some edible markers: by using them to trace cookie cutters, I was able to uniformly outline the design on each macaron before covering it with chocolate frosting.

After removing, decorating, and replacing every maracon that I had so painstakingly placed on the cake the night before, and after the aforementioned dash through the house to hide the finished product from Kate, the cake looked great; all that was missing now was the birthday message.

Now, I love handwriting; my own is obsessively (compulsively) neat, and I would rather write by hand than type on a computer any day. Unfortunately, my handwriting is neat in part because I write in all capital letters, which is a far cry from the cursive found on the tops of most cakes; as a result, messages I write in frosting generally look like they come from someone who teaches Kindergarteners for a living. So, not wanting to ruin the cake with block lettering, I decided to try my hand at the birthday cake banners that have been a growing trend on the internet.

With some paper, sewing thread (which will play a integral part in the dénouement of this tale), bamboo skewers, and artificial gold leaf for lettering, I was able to pull together a good-looking banner; and with that, the cake was finished! 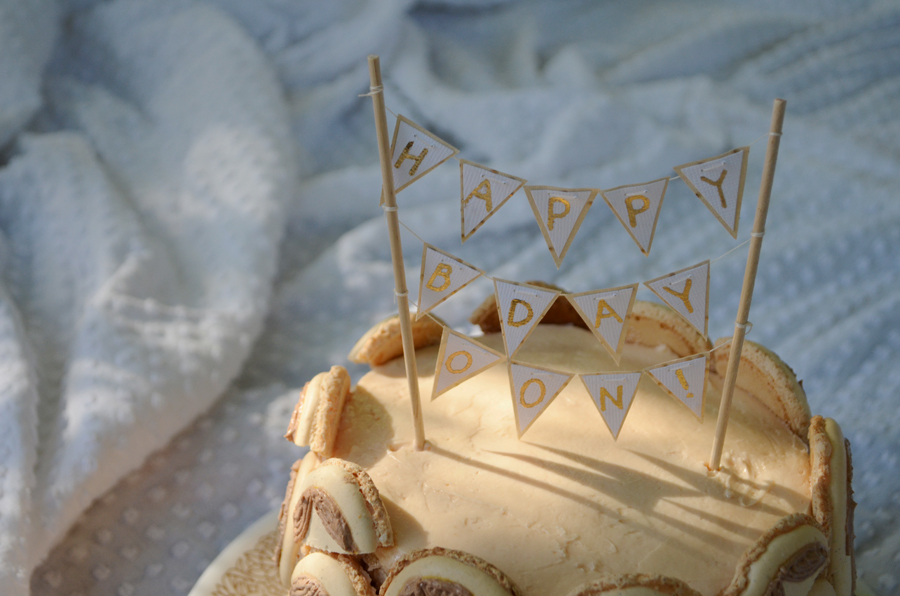 After a relaxing afternoon with Kate and a delicious birthday dinner, it was showtime. I retrieved the cake from the living room where it had ended up after my sprint out of the kitchen that morning, stuck the banner in the top of the cake, and arranged some candles around the perimeter that (I thought) would lend a nice effect to the cake as they reflected off the gold lettering on the banner. 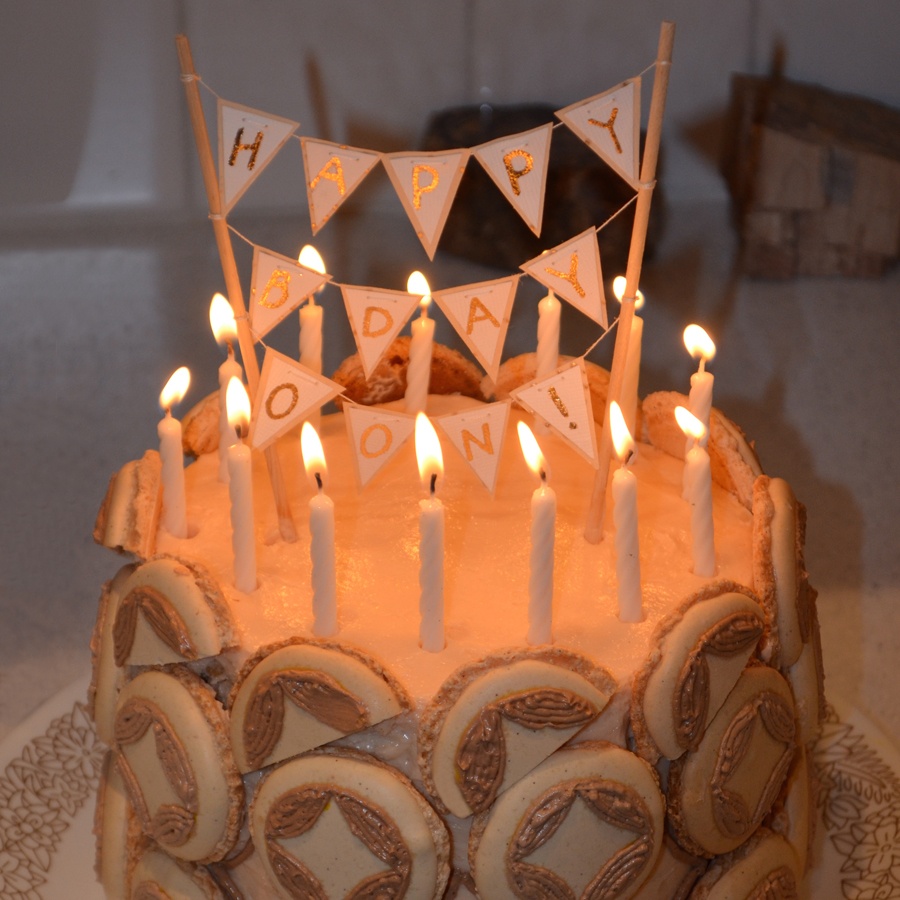 … A plan which worked out for about 5 seconds, until the heat snapped the thread on one side of the banner, sending it careening into the candles and resulting in an unintentional act of cake arson in front of the birthday girl.

Note to self: next time, fewer candles or thicker string.

But the cake was still delicious; the macaron shells had absorbed the moisture of the buttercream during the day, making them delightfully chewy, and the fire had even lent an interesting caramelized flavor to some of the frosting. But most importantly, Kate loved her macarOon cake and our family got a great story out of it that will probably be repeated (if hopefully not replicated) for years to come.

Vanilla Cake: My go-to vanilla cake recipe of the moment is this Yellow Cake from Real Simple magazine. The recipe is from the same Cake Story article I mentioned in my last post, and makes a cake that is moist, dense, and turns out perfectly nearly every time!

Frosting: I used this Swiss Meringue Buttercream from Martha Stewart for both the vanilla and chocolate frosting on this cake. While this is my favorite vanilla buttercream I’ve found so far in terms of striking a good balance between tasting too sweet and too buttery, it does take more work and more ingredients than your run-of-the-mill frosting. In addition to requiring egg whites, the recipe involves stovetop work and at least 15 minutes of beating (thank God for stand mixers!) to ensure the right consistency. I use this frosting for special occasion cakes, or when macarons are involved; otherwise, this Vanilla Frosting from the Real Simple article mentioned above is my go-to buttercream.

Macaron Shells: Martha again! I use her French Macarons Basic Recipe that was featured in the March 2014 issue of Martha Stewart Living. I had never made macarons before finding this recipe (they have a reputation for being complicated, finicky confections, especially in humidity), but Martha’s step-by-step guide make them easier, if still not a cinch, to make. Make sure you tackle these when you have plenty of time and plenty of patience for precision (i.e. not when you’ve had a couple of glasses of wine with dinner). The best part about this recipe is that it’s easily customizable for different flavors; Kate and I love the mocha variation, while I used the vanilla bean macarons for this cake. Because the online article I link to above mentions but doesn’t include the flavor variations, I’ve added them below. 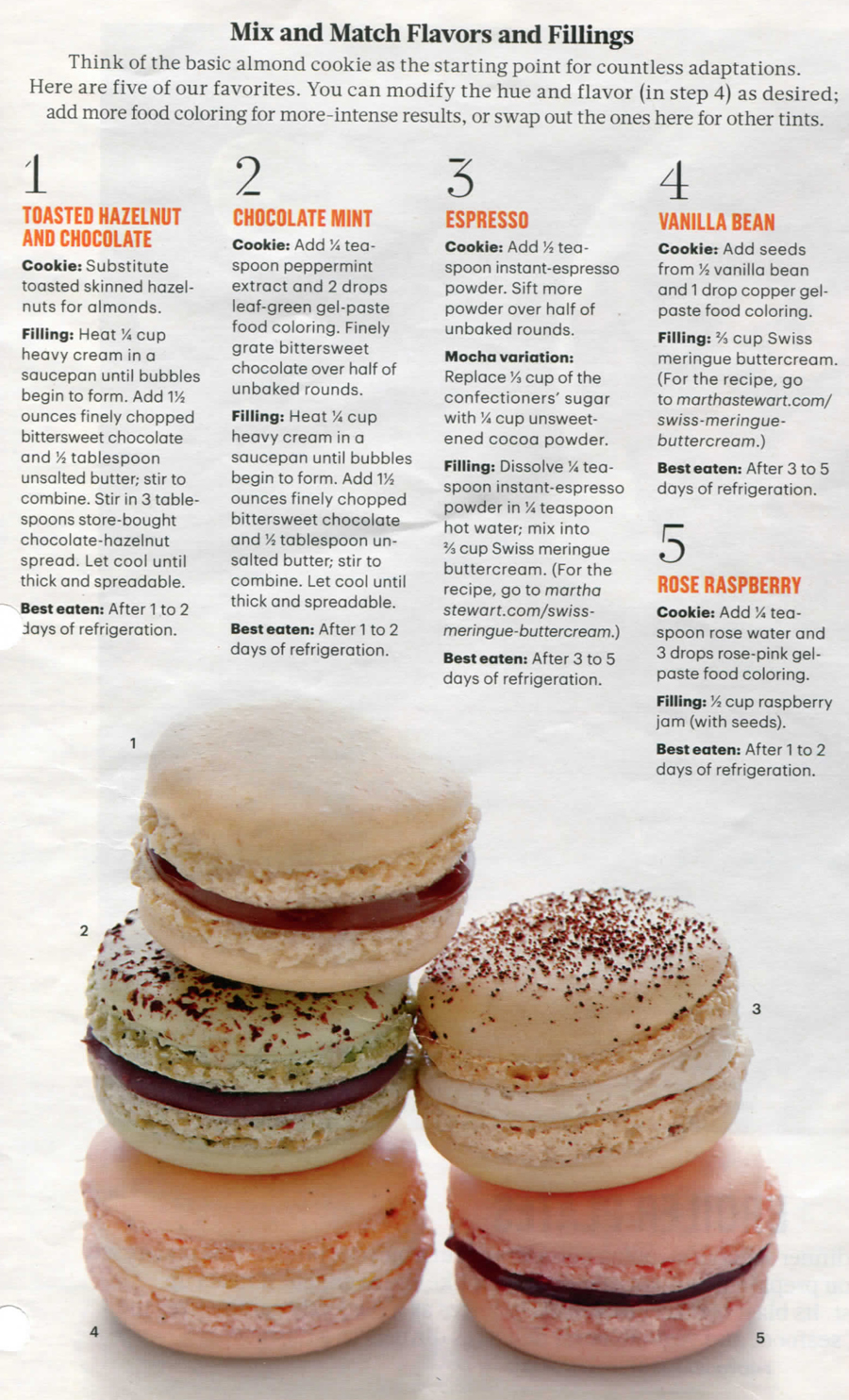